Buddhism, Vegetarianism and Veganism: A conversation with Bodhipaksa and Samacitta 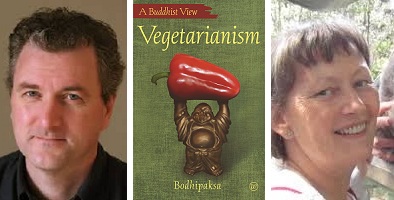 As October is Vegetarian Awareness Month, and World Vegan Day is on the 1st November, I wanted to spend some time reflecting on vegetarianism and veganism in the context of Buddhist practice. So I searched out some Buddhist experts on the subject: Bodhipaksa, author of Vegetarianism: A Buddhist View, trained vet and vegetarian for over 20 years, and Samacitta, committed vegan, chair of Birmingham Buddhist Centre (the first Triratna Centre to adopt a vegan shopping policy) and author of Buddhism on a Plate: the case for Buddhists to go vegan.

I was interested to know what it means to be a Buddhist vegetarian in the modern world. What is distinctive about the Buddhist approach to vegetarianism? Is it an essential Buddhist practice? How do we, as Buddhists, relate to meat-eaters? The Triratna community has always encouraged vegetarianism, but should we start thinking about going vegan?

The starting point of any discussion of vegetarianism in the context of Buddhism has to begin with the first precept: as Buddhists we undertake to abstain from harming living beings. When interpreting this precept (and Buddhist ethics in general), the emphasis is often put on intention. However, in the context of vegetarianism, both Samacitta and Bodhipaksa stressed mindfulness of the results of our actions. “Although our intentions are important, some of our intentions are unskilful and unconscious so it’s important to look at the consequences of our actions as well as our intent,” Bodhipaksa argues. Once we can see clearly that our unskilful habits are causing harm to ourselves and others, we can form the intention to let go of them.

For many of us, eating meat is an unconscious and unquestioned habit. Bodhipaksa argues that “the meat industry is based around ignorance. We’ve been brought up with milk cartons with pictures of smiling cows on them, and the meat industry goes to quite some lengths to prevent you from knowing what’s going on. So we’re conditioned to think that animal suffering somehow is not real; that it doesn’t take place.” Samacitta agrees: “I find that quite often people who are against veganism just don’t want to know what’s going on behind the scenes. It’s inconvenient for them to know, so they shut their eyes to the reality.”

Interestingly, it was finding out just what goes on behind the scenes that motivated Bodhipaksa to become a vegetarian – he visited an abattoir as part of his veterinary training, and hasn’t eaten meat since. Similarly, after having been vegetarian for nearly 30 years, Samacita decided to find out more about the dairy and poultry industries. She read two books: The Face on Your Plate: The Truth About Food by Jeffrey Moussaieff Masson and Eating Animals by Jonathan Safran Foer. “Reading those books, I realised that the dairy and poultry industries were just as cruel as the meat industry,” she told me. “I realised that every product that comes from an animal’s body is directly connected to the suffering of that animal. That was the turning point for me. Knowing what was going on, I just couldn’t carry on doing what I was doing.”

Although the title of Bodhipaksa’s book is Vegetarianism: A Buddhist View, all of the arguments he uses in the book, and the information he puts forward, also support an argument for veganism. In fact Bodhipaksa is also a vegan, and was vegan when he wrote the book. He believes that “Veganism is just a natural outcome of vegetarianism,” but recognises that “going straight from being a meat eater to being a vegan is a big step.” If we, as Buddhists, can encourage people to stop eating meat, then that’s a pretty good starting point.

In Samacitta’s words, “Being a vegan is being a Buddhist in the sense that you’re aware of what you’re doing and the consequences of what you’re doing.” But is there anything that Buddhism could learn from the vegan movement? “Vegans are demonstrating that having compassion for other living beings is both natural and human,” she says, “whereas Buddhists are aspiring to develop the Great Compassion of an Enlightened Buddha. So perhaps what Buddhists can learn from the vegan movement is that our ideals could be expressed much more consistently and fully in our actions.” Although vegans can sometimes be criticised for being self-righteous and dogmatic, “most of the vegans I know are not at all like that,” Samacitta explains. “But as Buddhists we do have some really useful tools for refining the emotions. We have practices like the metta bhavana which help us cultivate compassion towards ourselves and others.”

Being a Buddhist vegetarian or vegan is therefore based on not only mindfulness but also on compassion. “Vegetarianism is part of a deep-rooted principle that’s embedded in Buddhism, which is that we’re trying to be empathetic and live lives of kindness,” Bodhipaksa says. Samacitta also expresses this viewpoint: “A key foundation of Buddhist ethics is identification with other living beings. Becoming aware that other beings also want to be free from suffering, and living a lifestyle based on that vision brings you more into harmony with all that lives.”

I liked Samacitta’s emphasis on the positive effects of becoming vegan. Both vegetarianism and veganism are often talked about in relation to what they are not, i.e. consuming animals or animal products. However, in a purely positive sense, what is so good about living a vegan life? “I imagined that going vegan would be hard, but it’s actually opened up this whole new world,” Samacitta told me. “I enjoy my food so much more. Also, I’ve learnt to bake!” Before she became vegan, Samacitta had never baked a cake in her life. Now she is an avid vegan baker. She showed me The Cake Scoffer, a vegan recipe book which included her favourite recipe: Black Forest cherry cake. “It’s very popular at the centre,” she said, “as is my vegan cheesecake. And in the savoury line, chestnut paté en crôute always goes down well.”

Bodhipaksa was keen to point out the health benefits of vegetarianism, too. In fact, he is so confident of them that he is bringing his two young children up as vegetarians. “They went through a rather cute phase of referring to other families as ‘meat hunters’,” he added.

Becoming vegetarian and vegan also help the planet. “The livestock industry in particular is responsible for an enormous amount of the greenhouse gases that bring about climate change,” Samacitta told me. So, as part of its plan to become more sustainable, Birmingham Buddhist Centre has adopted a vegan shopping policy. “We had a slightly softer version of it for a year or two, which was a vegan shopping policy plus milk, but since Buddhist Action Month in June this of year, we haven’t provided cow’s milk.” I was interested to know how easy the policy was to adopt. “It was very easy for us. All you need are trustees who are aware and committed enough to the issues to make the change.”

But, I asked her, will our actions really make a difference? “Although we probably won’t be able to stop the whole meat or dairy industry in our lifetimes, every single person who commits to becoming vegetarian or vegan will save the lives of thousands of animals. There’s that story of two friends who are walking along a beach. Hundreds of starfish have been swept up by the tides, drying out and dying on the shore. One of the guys is walking along, picking up starfish and chucking them back in the water. And the friend says, ‘Why are you bothering? There are thousands of starfish; you’re never going to make a difference.’ And the guy who’s been chucking them in says, ‘It makes a difference to this one.’”

Should all Buddhists be moving towards veganism? How do we relate to meat-eaters? Bodhipaksa and Samacitta answer these questions and more in the second part of my interview.