A review of the year 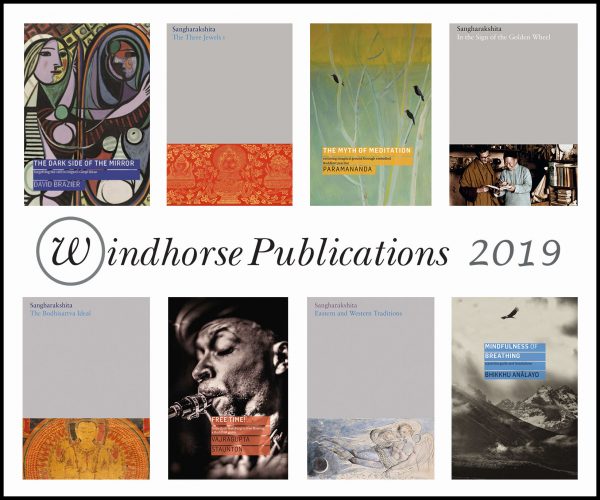 As 2019 rolls to a close, we thought we’d look back at Windhorse Publications’ highlights of the year, as well as looking ahead to 2020.

What we’ve published this year

This year we’ve released eight new titles, covering a wide range of themes and appealing to a broad readership, from the complete newcomer to Buddhism to the experienced practitioner:

Other events this year

In February we said goodbye to Giulietta Spudich and welcomed Helen Lewis as our new Communications and Sales Co-ordinator. Helen says the new role has involved a steep learning curve, but she’s thoroughly enjoying it.

In April members of the Windhorse Publications team attended a Complete Works meeting at Adhisthana where many of the people involved in the project shared their perspectives on it, including challenges they’ve encountered and lessons they’ve learned. They also looked to the future and discussed ways of ensuring the project’s continued success.

In July we launched our #lifechangingbooks campaign on social media, sharing videos of people talking about a Windhorse Publications book that has changed their lives. Although the campaign is now over, you can still watch the videos here.

Thanks to the generosity of volunteers from the Cambridge sangha, Windhorse Publications had a presence at the Buddhafield festival in Somerset in July and at the Triratna International Gathering at Adhisthana in August.

In October and November intern Gayathri Mahesh joined the team for one day a week. A graduate in Civil Engineering from Chennai, India, Gayathri has a passion for writing and is currently studying for an MA in Creative Writing and Publishing at Anglia Ruskin University.

Despite the continuing uncertainty around Brexit, we’re pleased to report that sales have been relatively healthy. We don’t yet have final sales figures, but based on the first eleven months, 2019 is shaping up to be a slightly above average year.

Our best-selling title this year has been Mindfulness of Breathing: A Practice Guide and Translations by Bhikkhu Anālayo, hailed by meditation teacher Guy Armstrong as ‘the most complete and in-depth guide available for this classic meditation’ and endorsed by several high-profile teachers with an international following. Mindfulness of Breathing was only released three months ago, but stocks are already getting low and we’ll be reprinting it next month.

At the end of January, we’ll be saying goodbye to another long-serving member of the team, our accountant, Lee Walford. Satyapara will be taking over Lee’s role.

April will see the release of three new volumes of The Complete Works of Sangharakshita: Volume 14: The Eternal Legacy / Wisdom Beyond Words, Volume 23: Moving Against the Stream and Volume 25: Poems and Short Stories.

In June we’ll be releasing two more titles by Bhikkhu Anālayo: Introducing Mindfulness, which is suitable for beginners, and the more scholarly Mindfulness in Early Buddhism.

Later in the year we’ll be publishing two books by new authors. It’s Not Out There: How to see differently and live an extraordinary, ordinary life by Danapriya will appeal to anyone who wants to suffer less and enjoy life more. Uncontrived Mindfulness: ending suffering through attention, curiosity and discernment by Vajredevi is a meditation practice guide suitable for those wishing to take their practice deeper. More information about Uncontrived Mindfulness will be available soon.

It’s possible we may release another title before the end of the year, as the production schedule for the final quarter of 2020 hasn’t been finalised yet. As they say – watch this space!