We recently had the pleasure of interviewing respected Buddhist teacher and author, David Brazier, about his upcoming book, The Dark Side of the Mirror: forgetting the self in Dōgen’s Genjō Kōan, due for release on 19 March 2019. 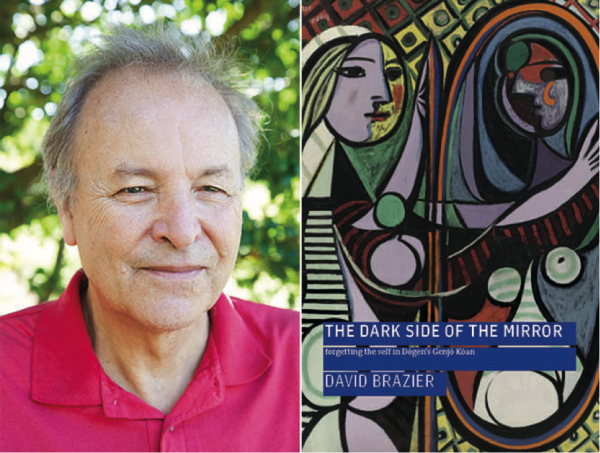 What is the significance of the title: The Dark Side of the Mirror?

The theme of the text Genjō Kōan, written by Dōgen when he returned from China, was the nature of satori (Japanese: spiritual enlightenment). Many people think that enlightenment comes as a result of a long training or through a long period of gathering merit, but, in fact, satori occurs suddenly and not always to the most virtuous or most skilled people. Dōgen wanted to explain this and in Genjō Kōan he uses the analogy of how a piece of glass or the surface of a sheet of water can suddenly switch from being transparent to being a mirror. This switch occurs when one side becomes dark. In the text he also uses several other analogies to make the same point, but this is the crucial one. Many renderings of Genjō Kōan into English treat it as a series of separate teachings, but as I came to understand it, it has only one central meaning revealed in different figures and explanations.

What was your inspiration for writing the book?

Well, Genjō Kōan is clearly, as my teacher Kennett Roshi always said, a very important work. Dōgen intended it to be Chapter One of his magnum opus. However, it is not at all easy to understand and most of the existing translations leave one feeling that there is something important here without really revealing what it is. I did not set out to write a book, I set out to understand the text and the deep spiritual meaning. It gradually became a big study. Eventually I had so much material that there was plenty for a book and it seemed a shame not to share what I had found. I now understand Genjō Kōan a lot better than I did a few years ago. Nonetheless, I’m sure that it still harbours more secrets and mysteries that other scholars and practitioners will investigate. I hope my work may be a step on our road to greater understanding.

If you could sum up Dōgen’s Genjō Kōan in just three words, what would they be?

I can do it in four: “Abandon self; accept reality.” Maybe three would have to be “Buddha, Dharma, Sangha”! Many people think that Zen is somehow different from or apart from the rest of Buddhism, or that it has no rituals, is just a practice, etc. This is a big misconception. Dōgen studied the Buddhist scriptures deeply and had a mystical vision of life, and in this vision the whole of what we think of as reality is encompassed, as well as dimensions that we modern people have lost touch with. If you had asked this question to Dōgen himself, he would probably have said “Accept your lot.”

What have you learned from writing The Dark Side of the Mirror?

I’m pleased to have been able to burrow into Dōgen’s life and his world and to try to achieve an empathy for a time very different from our own, when people would put their life on the line to go and get the teachings from a faraway land. I find this inspiring, so it feeds my Buddhist faith. Dōgen’s thought integrates elements from Taoism, Confucianism and different forms of Buddhism, as well as bringing together Indian, Chinese and Japanese philosophical concerns, so it is also an encouragement for the process by which religions learn from one another and encouraging for those of us who sense a deeper meaning beyond particular forms. Again, Dōgen met with many setbacks and humiliations and was, at least technically, a layman when he was enlightened: all of this inspires and encourages.

What do you hope readers will gain from reading the book?

I expect different people might get very different things. Somewhere hidden in Dōgen’s lines is the secret of complete enlightenment! Then, I hope that the reader will realise that Dōgen was not a narrow sectarian; I hope she will gain some empathy for his human life and a feeling for the times in which he lived; I hope she will be enriched by Dōgen’s metaphors, analogies, poetic language and spiritual insight; I hope she will, at least in some degree, change her view of Buddhism; and, above all, of course, I hope that she will now begin to truly understand Genjō Kōan and put it into practice.

Do you have any other writing projects in the pipeline?

Yes. I am part of the group of editors currently producing the Oxford University Press Handbook of Meditation. I have a volume of my own teachings close to completion for which the tentative title is In Less Than a Day. Both of these should come out before the end of 2019. I am also working on a translation and commentary on the Taoist classic, the Tao Te Ching, hopefully for 2020, and I have some material prepared towards two other future books, one on Buddhist psychology and one on Pure Land Buddhism.

If you would like to support Windhorse Publications in publishing life-changing books, you can sponsor The Dark Side of the Mirror here. For a sponsorship of £40 or more you will receive both a printed copy and the DRM-free eBook immediately upon publication. For less than £40 you will receive the eBook only.

Alternatively, you can pre-order a copy of The Dark Side of the Mirror here.