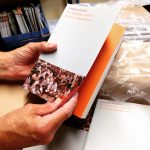 We at Windhorse Publications have just published the very first of the 27 volumes that will comprise The Complete Works of Sangharakshita; a momentous step in our project of gathering together this great teacher’s output including Dharma teachings of many kinds, commentaries, memoirs, poetry and more. This first volume, volume 9 in the series, is entitled, Dr Ambedkar and the Revival of Buddhism I. It includes Sangharakshita’s Ambedkar and Buddhism, which has been out-of-print for some time, along with 36 talks given in India on his 1981-2 tour, most of which have never been published before in their original English. This volume has been released to coincide with the 60th anniversary of the mass conversion to Buddhism of people who came from the so-called ‘untouchable’ communities, led by Dr Ambedkar, the great reformer and architect of the Indian Constitution, and an ‘untouchable’ himself, who saw in the Buddha’s teaching not only a path for the individual but also the means for changing society.

In this interview, we speak with the two co-editors of the entire Complete Works, Kalyanaprabha and Vidyadevi, about their experience. Listen to the audio on Soundcloud.

Hello, I’m Giulietta from Windhorse Publications. I’m speaking with Kalyanaprabha and Vidyadevi, the two co-editors of The Complete Works of Sangharakshita. Would you like to introduce yourselves and your roles?

V: Well, I’m Vidyadevi, and Kalyanaprabha and I have the same role, really, which is to work together on editing The Complete Works. So for me, this is part of the very longstanding connection with Sangharakshita’s works. I think I started editing with him/for him in about 1987 and I have been more or less doing that since, in different ways. So The Complete Works feel like a lot of things, really. But what’s new is working with Kalyanaprabha.

K: I’m Kalyanaprabha. I came into the picture much later than Vidyadevi in terms of editing. I started working with Bhante only in 2010 and brought out the last five books that were published by him under Ibis Publications.

G: I wanted to ask one or both of you what is especially rewarding about this project?

V: Well, I think the rewards are still to come, in a way. Well, it’s brilliant that you’ve just shown us the first ever form of the physical volume. So that’s rewarding to see in itself. I think for me it will be the completion of the project, which will then be rewarding. But I must say one of the great pleasures of it so far (we’re just into our second year, I suppose) is working together on it. I think a lot of literary work is quite solitary, and it’s not always easy to work out how to work together on things, and there are different people involved, and they’ve all got different ways of seeing things and different things that are priorities. So just trying to work all that out is a challenge, but it’s really rewarding when it all comes together, and just in terms of friendship and connection, and to feel that it’s a very human project that we’re working on. It doesn’t feel at all robotic, like a matter of … something mechanical … like we’ve got this task to do and it’s a matter of gathering together all these words … it feels like something much more, and I think that’s down to the kind of relationships, which are not always easy, but are always rewarding sooner or later … sometimes later than one might hope.

K: As Vidyadevi says, it has been rewarding working together, challenging too in a growth-full kind of way, but really the collaboration with Vidyadevi, Priyananda and all the others involved has been a boon. For me a very significant ‘reward’ is knowing that through this work Sangharakshita’s teachings are being further secured for the future, for future generations, and, along with the online resources, will be a means for reaching people all over the world who have not yet come across the Dharma or not yet come across the Dharma in a way they can respond to. The Dharma has so much potential for improving our world I’d like to see those seeds that are Bhante’s teachings scattered as far and as wide as possible.

G: You mention communicating and collaborating with others. So how many people would you say are involved in compiling and editing The Complete Works?

K: Well, for Volume 9, I made a rough count that about 30 people have been involved in some way or another. So some people have typed up transcripts of lectures, some people have helped us check our references, and then we’ve got the team that’s working on every volume together, that’s six or seven of us. That’s quite a lot of people involved. I remember Bhante saying ‘involve lots of people’. It’s a very rewarding way for Sangha to come together and contribute to something very important.

G: Can you think of what was your biggest challenge in embarking upon this project?

V: I can think of several: the challenge of working out how to do it; the logistics of such a very big project. There were so many books. There was the challenge of committing enough time, resources, energy (personally) to really engage with it. There was the challenge of working out, as I was saying, how to do it – how to share the tasks between members, and take account of all the different views, the difference voices, the different priorities …. Objectively speaking, there is a lot to do, and subjectively speaking, it’s the move from doing something in a solitary way, and working something out in your own mind, to trying to communicate that to others, have it challenged when needed, trying to articulate or explain what you mean by something that’s not easy to explain. It’s not always easy to talk about what you mean by an idea you’ve got in terms of how to organize words, or whatever it is. It’s much easier to work on your own and keep that to yourself. It’s not an option, and I’m on the whole glad it’s not an option.

K: I think for me a big challenge was the sheer scale of Bhante’s output. I was overwhelmed when all the books were lined up as it were – so how are we going to work out what to put with what? That was a very big challenge. I was very happy that Vidyadevi has the sort of mind that can somehow see patterns in big amounts of data, you might say. We came up with this idea of the six baskets, into which the texts would fall. That was one challenge.

I think the other challenge was to get this volume that you’ve just shown us, the very first volume, out in time for Dr Ambedkar’s celebrations – the 60th anniversary of the conversations – so we were very keen to get it out in time. It was a bit of a push as you know, but we’ve done it! So this is really wonderful, and hopefully it will be in the [Triratna Buddhist] Centres and in India for the celebrations. It’s not only Bhante’s own work on Dr Ambedkar, which is a tremendous work (Ambedkar and Buddhism) [but also] lectures Bhante gave in India, most of which have never been published before.

V: By the way, a lot of credit to Kalyanaprabha for that, because she really helped us in forming that idea, and she’s really good at forming a network. To gather the resources to do that, to help us get most of it out in the world, I think that’s a real strength of hers.

G: I can imagine it’s a difficult question to answer considering the volume of work Sangharakshita has put out there, but do you have a favourite book?

K: Well, actually if I had to choose the one book for the desert island, I would take Bhante’s poetry. His Complete Poems. I find for one thing they take you right from 1944-1997 (the current ones [to be] in The Complete Works [will] bring you right up to date, right up to 2016). They reflect so many moods, so many sides – many beautiful words and images. That is one I would take with me.

V: I knew you were going to ask this question, and the one that came to mind is the one that I’m working on at the moment, which doesn’t yet exist, exactly. We’re doing two volumes of The Complete Works – they will be based on the Songs of Milarepa, on which Sangharakshita conducted a whole series of seminars. We’re making those into a book which will feature, really, Milarepa and then his disciple Rechungpa. I just love this interaction between Milarepa and Rechungpa. Rechungpa is a disciple who by turns lacks confidence, is terribly proud, gets distracted really easily – all these sorts of things, and how does Milarepa, who can clearly see his potential, help him work through his different moods and modes. There is a whole sequence of events – he wants to go off to India to get some special teachings, and nothing Milarepa can say will stop him going, and then when he gets back, of course, things didn’t go quite as he expected, all of that. It all just sounds so horribly familiar. And you know, the seminar discussions get under the skin of the words of the people speaking in medieval Tibet. It’s a wonderful coming together of things. My heart is really warmed by these interactions between Milarepa and Rechungpa. So I think that’s my current favourite. It’s on our publishing schedule for 2018.

K: 2018 is the 50th anniversary of the founding of the [Triratna] Order. So it seemed very appropriate to have these volumes on discipleship at that point.

V: Yes, that’s the link. The title of the volume is Milarepa and the Art of Discipleship.

G: Would you like to say something about the other volumes coming out?

K: There will be three volumes published in April 2017. There will be what we now know as The Rainbow Road, which will be entitled with its original title The Rainbow Road from Tooting Broadway to Kalimpong – the first volume of Sangharakshita’s memoirs, which has been out of print for a little while, so that’s coming out with one or two new photographs as well. Then there are two other volumes edited by Vidyadevi.

V: Then there is one which is The Three Jewels II, because we have two volumes of The Three Jewels. The Three Jewels II is a combination of Who is the Buddha?, What is the Dharma? and What is the Sangha? They are old favourites, and we put them together in one volume. We’ve put quite a lot of effort into devising a whole sequence of new endnotes. It’s come to be quite important to us to really identify where the teachings come from, and so on and so forth. It’s been a real tour de force in terms of the creation of endnotes. So that’s The Three Jewels II. And then the other one is also a compilation of three things. It’s Mahayana Myths and Stories. So that’s the commentaries on The White Lotus Sutra, The Sutra of Golden Light and the Vimalakīrti-Nirdeśa. It brings those three together. That would be another favourite book of mine, I love that one, those old Mahayana stories, and they come together quite beautifully as a sequence. We’ve just received the foreword, which is written by Dharmacari Ratnaguna. He’s really done a good job.

G: Thank you for your time. We’re looking forward to seeing the next volumes.

The first published volume, Dr Ambedkar and the Revival of Buddhism I, is now available for purchase. Subscribe to the Complete Works of Sangharakshita for discounted rates on the whole set.