‘Karma, Interdependence, and Blame’ – an article by Nagapriya, author of ‘Exploring Karma and Rebirth’ 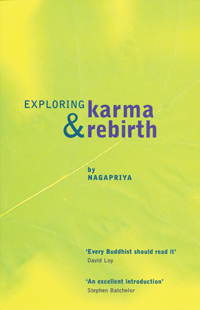 When speaking of Karma, we generally emphasise individual agency and personal responsibility or accountability; that is to say, we see ourselves as autonomous ethical agents who bear individual responsibility for our actions. We do it, we are to praise or blame, and so we reap the consequences. We see ourselves as capable of making personal ethical choices and as being exclusively responsible for them and for their consequences. The flipside to this is that we see others as exclusively responsible for their actions – since they are free, autonomous agents – and so they are solely accountable for the consequences of those actions.

However, none of us is completely free to choose our actions as, according to Buddhist theory, our ethical decision-making process is strongly informed by samskaras, which constitute a kind of ethical habitworld within which we function. Generally speaking, samskaras are regarded as the principal conditioning influence on our ethical conduct and are seen as products of our past actions; they are a kind of karmic residue. Consequently, in Buddhist thought, Karma is seen as an individualised process of ethically-coloured choice-making and habit-forming.

But among the many other important Buddhist teachings are those of anatman and interdependence. These two concepts are fundamentally the same idea but expressed in relation to a different focus. When we speak about anatman, we say things like ‘there is no fixed ego’, ‘no fixed self’, that we are ever-changing, impermanent, and so on. There is an idea that the self (small s!) is dynamic, capable of creative transformation and even subject to destruction through death. However, less often do we set the idea of anatman alongside the idea of interdependence. While we generally recognise that all things are in some sense ultimately interdependent, that everything depends upon conditions, we don’t always follow through the implications of this insight, especially in relation to our experience of self and our ethical practice.

We tend to isolate ourselves – and others – as ethical agents, assuming that we are exclusively responsible for our actions and that each of us acts autonomously. In this way, we wrench ourselves from our interconnected world and see ourselves as independent of it. Most notably, we wrench ourselves from our ethical interconnectedness with others; we do not therefore recognise that we are complicit in the actions of others and that they are complicit in ours. We exaggerate the degree of our moral autonomy and underestimate the degree of our moral complicity. While on the one hand we may milk the praise for something that we have not accomplished alone, on the other way may assume full responsibility for something in which we only played a part. We may even blame ourselves. Similarly, we may praise another for something that they did not accomplish alone or blame them for something for which they were not exclusively responsibility. In short, we tend to simplify moral responsibility and assign full responsibility to a single individual. We separate out an individual – either ourselves or another – from the totality of conditions and see a causal relationship between that individual and a particular consequence. We want to hold someone responsible for what has happened and that may be ourselves or someone else. Some of us tend to blame others, some of us tend to blame ourselves, more rarely do we recognise that none are to blame, or that all are to blame, or even that blame is completely the wrong way to think about the issue.

When we blame others – or indeed blame ourselves – we are simplifying a complex situation and reducing it down to one cause or condition. Blame has nothing to do with responding constructively to unskilful behaviour or unwelcome consequences and is itself an unskilful karma. Blame expresses anger, even hatred, and it certainly expresses delusion since it oversimplifies the causal factors in play. Through blaming others, we absolve ourselves of our complicity in their actions, through blaming ourselves we absolve others of their complicity in ours.

Applying the principles of anatman and interdependence to ourselves – and others – as moral agents results in a much more complex understanding of ethical responsibility and ethical transformation, one in which we are, in some senses, less responsible for our own actions and paradoxically more responsible for the actions of others; that is to say, you are – at least to some extent – responsible for my actions and I am – to some extent – responsible for yours. This does not mean that we are in some sense freed from the burden of individual accountability. We may be held accountable for our actions – by the law and by others – notwithstanding. I do not mean to absolve myself or anybody else from the ethical responsibility that follows from recognising that I – or they – have acted badly but rather to point out that the factors which condition our ethical decision-making extend beyond the urges of our personal conscience. Our personal conscience is not the sole determinant of our action or rather, I should say, our conscience is not exclusively our own but something shared with others and so partly constituted by them. The actions of others and their encouragement/discouragement, approbation/disapprobation – above all their moral imagination – has a significant impact upon our moral imagination. If we are able to take this into account then, paradoxically, we will be in a position to take more responsibility for our lives by realising that we are not in fact exclusively responsible for what we do.

By recognising that we do not in fact have exclusive authority over the way we feel, think, and act we can begin to develop greater sensitivity to the forces that are shaping us; both personal and institutional. In doing this, we can begin to re-examine which forces we wish to be shaped by and which we want out of our lives altogether. It may be that some unfavourable forces are bearing down upon us in ways that we cannot easily stand free from, and this is difficult. However, pretending that we can in fact completely resist their impact will not help us to deal with them. I am recommending, I suppose, humility in relation to our own moral resolution, a recognition that our moral sense is fragile, easily disrupted, and sometimes overwhelmed. Understanding this can help us to think more strategically about how we may sustain and enrich our ethical realm rather than feeling like failures for not being able to resist the incursions of negative influences.

‘Exploring Karma and Rebirth’ is available from the Windhorse online store, £8.99