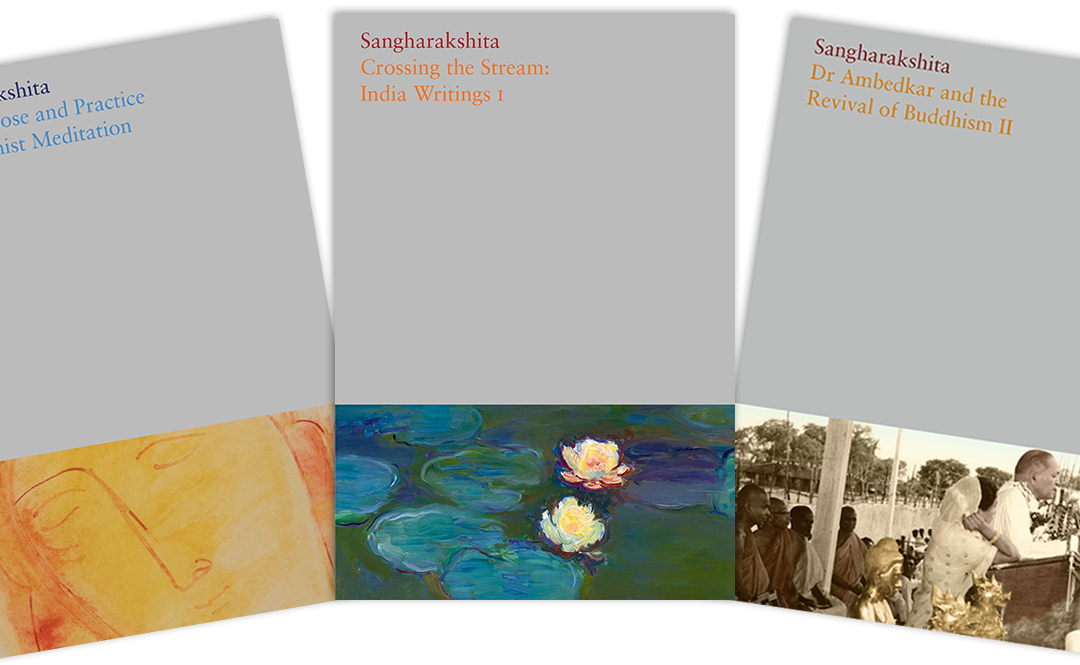 The next three volumes in the Complete Works have just been released, bringing the total number of published volumes to eighteen. We’re now officially two thirds of the way through the project. To mark this milestone, the chief editor, Vidyadevi, has written a Complete Works update.

The new volumes are:

Volume 5: The Purpose and Practice of Buddhist Meditation
A compilation of Sangharakshita’s teachings on meditation
Whether dipped into, consulted on a specific subject, or read from cover to cover, this collection offers practical, inspiring and encouraging advice for new and experienced meditators alike. With a new introduction by Kamalashila, it is deeply imbued with the Buddhist vision of the role of meditation in the quest for Enlightenment.

Buy Volume 5: The Purpose and Practice of Buddhist Meditation

Volume 7: Crossing the Stream: India Writings I
The complete collection of Sangharakshita’s early essays (1944 – 1964)
This volume contains the previously published collections Crossing the Stream and Early Writings, plus other articles long since out of print. All the essays are fully annotated, and those previously published in Early Writings come with a detailed commentary and extensive introduction by Kalyanaprabha. A foreword by Nagabodhi introduces the collection. The insights and ideas expressed in these brief passages are as illuminating, as stimulating and as indispensable as anything Sangharakshita was ever to produce.

Volume 10: Dr Ambedkar and the Revival of Buddhism II
This companion to volume 9 continues the story of Dr B.R. Ambedkar and his role in the revival of Buddhism in India. It includes a celebration of the fiftieth anniversary of Dr Ambedkar’s conversion to Buddhism, a commentary on Dr Ambedkar’s article ‘Buddha and the Future of His Religion’, articles on the mass conversion in 1956, an account of Sangharakshita’s visit to Nagpur at the time of Dr Ambedkar’s death, and notes from some of the hundreds of talks Sangharakshita gave in India during the next few years, as well as later talks he gave both in India and in the West. There is also Sangharakshita’s commentary on the Udāna, along with a new translation from the Pāli by Dhivan Thomas Jones.

Buy Volume 10: Dr Ambedkar and the Revival of Buddhism II

You can, of course, buy individual volumes of the Complete Works, or subscribe to the whole collection. But you may also want to select a few volumes that are of most interest to you. For example, the biographies; the Milarepa volumes; those that deal with India; or commentaries on Pāli or Mahāyāna texts. You can see the list of all the Complete Works volumes here.

We wanted to make it easier and much more cost effective to get hold of the volumes you want. So we’re pleased to announce new ‘Choose your own’ Complete Works bundles. When you buy a bundle, you get to choose any five or any ten of the twenty-seven volumes in the Complete Works in either paperback or hardback. We’ll send published volumes straight away. You can also choose unpublished volumes, and we’ll send them to you as soon as they’re released. As you can see from the prices below, the bundles are excellent value for money.

Create your own Complete Works bundle

If you’d like to know more about the Complete Works, check out these videos:

Two of the key Complete Works editors, Kalyanaprabha and Vidyadevi, discuss their roles in the project.
Satyalila and Dhivan talk about their passion for leading study on The Complete Works.