On the second anniversary of Manjusvara’s death, an article on his life by Satyalila 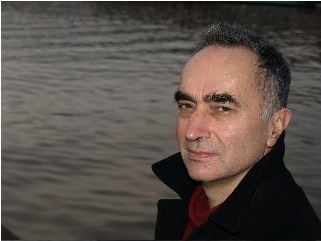 A phrase that came to mind was one Manjusvara once used of his friend, Vajradaka – ‘a magician’. There was something of magic about Manjusvara, so let me say that first. After he died we had a practice evening at the Bristol Buddhist Centre and in the silence between readings of his poems, a blackbird sang. More than one of us came away feeling he’d been there with us.

If you’d like a few more concrete facts, he had Irish roots, was born into a working class family in Hertfordshire in 1953 and through all his early-into-middle life, music was his passion. At three, he was frustrated with the toy piano he was given, and went on to study music (including with John Cage), becoming a composer. Sometime in all of this (in his late 20s) he very nearly died in a car accident in America. This changed his life. Soon after (I think) he went to the London Buddhist Centre, helped build it (wearing gloves to protect his pianist’s hands!) and decided to ask for ordination. He talked of working at Aryaloka, the Triratna Centre in New Hampshire, making wooden hearts for a right-livelihood business. His great love was Meg, the American woman who became his wife (though they later divorced, but remained friends). They married, Meg said, particularly to make it easier to travel to India together on a trip for the Karuna Trust in 1990. There was a long and painful story around them getting married, as this happened in the midst of the time when marriage ‘wasn’t done’ in the Triratna Community, and the effects of how they were treated at the time reverberated through the rest of his life, I think it’s fair to say – and think he would say.

Manjusvara’s poetry and the Dharma

His relationship with the Dharma, the Buddha’s teachings, and his writing was interwoven. He’d often say ‘I’m not a Buddhist’, meaning by that, that he rejected formalizations and ‘isms’ – not that he rejected the Buddha. The Dharma is in the DNA of his writing – so integral, perhaps, that an inexperienced eye might miss it there! There are times when he more explicitly mentions the Buddha and the Dharma. His poem Ghazal, Buddha reads like a sutra, to me, and his detective novel (The Deal Runner, also being posthumously published this summer) has Dharmic themes and references woven through it.

When it was that Manjusvara first began writing, I couldn’t pin down, but I can see in my mind the pattern of how it dovetailed with him losing his hearing. He first learned that his hearing was beginning to fade whilst he was still a composer. As he let go of music (‘The gift of music – my gift – being given back./That marvellous place, where I found my home/in childhood, being vacated inexplicably,/deep in the bones…’) writing came to fill his frame. Julian Long, a poet and friend of Manjusvara’s who took part in many of his writing workshops, described him as ‘A highly original voice, dedicated to wisdom, fearless, sensitive to the music of language – with great faith in the magic of poetry, its capacity to lead us into deeper dimensions of experience.’

Manjusvara as teacher: co-leader of ‘Wolf at the Door’ writing workshops

As I understand it, there came a time when he struggled hugely to encompass the tensions in his life to a point where he might not have remained in the Triratna Buddhist Order. Then he had a conversation with Ananda. My memory wants to say that Ananda walked with him round and round the botanical gardens in Oxford (where Manjusvara then lived) and helped him find a perspective which encompassed it all, enabling him to carry on. I want to say (again, it is maybe a poeticized memory!) that it was out of this that Wolf at the Door writing workshops grew. Both men wrote and struggled to encompass huge polarities in their lives and, in creating Wolf at the Door, found a way to share this work. Yes, it’s about writing – and it’s about much more than that, as well. (The Wolf at the Door website explains more about this, and I now continue Manjusvara’s ‘wolf work’, alongside Ananda, who’s very much alive!)

Manjusvara was a poet, he was also a friend – a friend to many, many people, all across the world. Julian says he saw Manjusvara as ‘the most reticent teacher – perhaps understanding that things and people most need to be as they are – to be given the space to be what they are trying to be – before any deep transformation can take place.’

India and the Karuna Trust

One can’t talk about Manjusvara without mentioning India and the Karuna Trust – two other great loves of his life. He and Meg honeymooned (as he put it) in India, meeting Dhardo Rimpoche – the last Triratna folk to see Bhante’s teacher alive. The connection with Dhardo Rimpoche was immensely important to him and he often spoke of him, and of this trip. Manjusvara’s feeling for the Dalit community (who were labelled ‘untouchables’) was immense. For 20 years or more he was good friends with Aniruddha, an Order Member who grew up in ‘the hell of caste’ and he had many, many other friends in India too. Out of that love grew his work with the Karuna Trust – fundraising to help improve people’s situation there. He loved his Karuna work best of all and said, rather poignantly, that as he grew older and needed to give things up, he’d want that to be the ‘last to go’. He described fundraising as a spiritual practice as being like ‘a magician’s hinge’. I’ve no idea what that literally means – but it captures his fascination with it beautifully. I think he was pointing to the mysterious potential to transform that comes from putting all of oneself into communication with other people in the service of ‘something more’. In the case of Karuna Appeals, this meant knocking on people’s doors to ask for money out of compassion – ‘karuna’ – for people in India. And crucial to this, he’d always stress, is being absolutely ordinarily oneself, using awareness and kindness to connect on the most human of human levels. Somewhere in this mix is the tension and the grit essential to the realization of wisdom, without which compassion is something mundane. Perhaps that is the ‘magician’s hinge’? Manjusvara used ‘wolf-style’ writing workshops as a tool to help train Karuna fundraisers.

Manjusvara’s two books on writing are called Writing Your Way and The Poet’s Way and they stem from more than 15 years of co-leading Wolf at the Door (‘Buddhist inspired writing workshops’) with Ananda. They are books about writing as a way to live your life – and I think he communicates that beautifully. Woven through both books are stories about Manjusvara’s own life and his writings and I think from this it’s possible to ‘catch’ what an extraordinary tool writing can be for spiritual practice. Just as with fundraising, as I mentioned above, there’s some way in which it can embrace both ‘something more’ and the utterly ordinary. Manjusvara’s ‘master’ (as he often said) in this practice of writing was William Stafford, an American poet he loved and met and published and whom (Manjusvara’s own word) he ‘revered’. It was Meg who introduced Manjusvara to Stafford’s writing, sending him books from the poetry bookstore across the street from her New York apartment when they were on opposite sides of the Atlantic. Manjusvara began a correspondence with Stafford, who then invited him to meet him at an award ceremony in New York. Stafford’s extraordinary gift, transmitted through Manjusvara, Ananda and ‘Wolf’ is the marriage of the everyday and the truly awesome – an over-used word these days, but here used in its proper sense: ‘a feeling of reverential respect mixed with fear or wonder’. (OED)

Manjusvara wrote many poems and a collection of them, Lost and Found, is being published to coincide with the anniversary of his death. In one poem (‘Gift of the Human’, published in a Wolf at the Door Pamphlet) he wrote a line about ‘facing the dark, tending the light’ and it seems to me that this was what he did. Describing Manjusvara, Julian wrote: ‘Kind and generous – he didn’t want people to suffer. He wanted to change the world.’

Manjusvara died suddenly from a brain haemorrhage in June 2011 in the middle of a Wolf at the Door retreat at Dhanakosa in Scotland. This year marks the second anniversary of his death. His poetry collection, Lost and Found, and novel, The Deal Runner, have been published to coincide with what would have been his 60th birthday, on 26 June 2013. They are available to purchase online from www.lulu.com/gb.