This post includes an update on that perennial favourite, the Puja Book; a sneak peek at one of the upcoming Complete Works volumes; the next instalment in our ‘Team picks’ series; a link to the recording of the book launch for Entertaining Cancer; and some very sad news about a former member of the Windhorse Publications team. 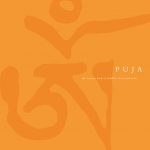 We’ll be publishing the next three new volumes in The Complete Works of Sangharakshita in late July. Over the next few months, we’ll be featuring a sneak peek into each of the new volumes. We’re kicking off with Volume 12. 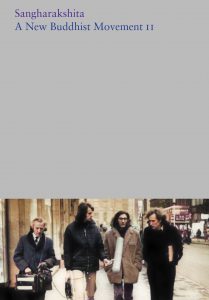 This illuminating collection of previously unpublished talks traces the development of Sangharakshita’s presentation of the Dharma in the West from 1965 to 2011. It includes some of his characteristic teachings in their earliest forms (the levels of Going for Refuge to the Three Jewels, for example), and makes other talks accessible for the first time in published form. We see the unfolding of the Buddhist movement he founded, from Sangharakshita’s talks before the movement began, his early teachings that foreshadow aspects of its nature, and then its beginnings in a basement in 1960s London. Other talks cover development of the sangha over the years, and Sangharakshita’s reflections on what would help it develop in the years to come.

Drawing on a wide range of sources, from the Pāli canon and The Tibetan Book of the Dead to Beowulf and William Wordsworth, there are many intriguing perspectives: an exploration of Buddhist psychology, the histories of great teachers like Padmasambhava and Atīśa, reflections on going forth, creativity, the demons around and within us, the role of the will in the spiritual life, and much more. The final talks in the volume, given towards the end of Sangharakshita’s life, are more personal, and they include reflections on dreams, old age and rebirth.

This week Publishing Controller, Michelle Bernard, writes about one of her favourite books by Windhorse Publications: Solitude and Loneliness by Sarvananda.

‘I really enjoyed reading Solitude and Loneliness by Sarvananda. I liked the way he uses examples from art, literature and film to create a vivid sense of the relationship between loneliness and solitude, like the poignant examples of loneliness in the children’s TV series of Robinson Crusoe, which, like Sarvananda, I remember seeing every school holiday; Charlie Chaplin’s The Gold Rush, noting Chaplin gazing through the window at the people enjoying themselves, shut outside on his own on new year’s eve, yearning the company of others; and Edward Hopper’s solitary, somewhat sad figures. As someone who has always favoured solitude and is happy with the ‘vast, cloudless, blue sky… an infinite stretch of sea…. the lonely cries of the gulls, the waves falling gently on the shore’, and who sometimes walks a tightrope balance between solitude and loneliness, this was a supportive, nourishing read.

The sections on making friends with yourself and enjoying your own mindful, aware solitude are inspiring and liberating. Also, the mention of Tenzin Palmo’s Cave in the Snow reinforced for me the inspiration to do solitary retreat that I gained from reading her book.

Above all, it is a wise and joyful exploration of how time spent in solitude, and the capacity to be alone, is very much part of the Buddhist path.’

If you missed last Monday’s launch of Entertaining Cancer, with the book’s author, Devamitra, in conversation with Sthiramanas, you can catch up by following the link below.

Watch the launch of Entertaining Cancer

Devamitra’s conversation with Sthiramanas was the first event in an online tour to launch Entertaining Cancer. Here’s the current list of book launch events. If you’d like to invite Devamitra to lead a book launch event, please contact Walter Monticelli at walter@windhorsepublications.com. 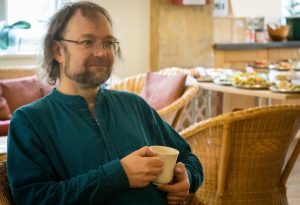 Some of you may remember Lee Walford, a mitra with the Cambridge sangha, who used to be our accountant. A few weeks ago, Lee was cycling to work at the Cambridge Buddhist Centre when he was knocked down by a car. He was rushed to the intensive care unit at Addenbrookes Hospital, where he remained in a coma. Last Friday, the decision was made to withdraw life support. Lee passed away on Monday morning. We’ve been deeply saddened by this tragic news.

Below, past and present members of the Windhorse Publications team share their memories of Lee.

‘I worked with Lee for just over 10 years; our times at Windhorse almost exactly coincided, both starting in late 2009 and both leaving in early 2020. In that period Lee worked part-time at Windhorse and part-time at the Cambridge Buddhist Centre. In all that time I always found Lee a loyal, hardworking and painstaking colleague. I was the director – effectively the business manager – and with Lee as accountant I was always kept on my toes. This is as it should be in any enterprise! In the 2010s Lee helped steer Windhorse through our transition to greater digital-book content, greater online presence and – crucially – increased online sales. In a small team these projects were no easy task, and one person with keen eyes on the finances is essential. Lee certainly provided those eyes. Apart from his professionalism, I appreciated Lee’s deep love of Buddhism, meditation and nature, as well as his left-field sense of humour and distinctive, boyish laugh. I enjoyed going on a few meditation retreats with Lee at Padmaloka, a retreat centre in Norwich, over the years. I was saddened to hear of Lee’s accident and death; I can appreciate how difficult this is for his parents, family, close friends and current colleagues. However, I also have a confidence in Lee’s good qualities and the momentum that he has created in this life. I have every confidence that Lee’s love of Buddhism and his joy in life are standing him in good stead right now and will do so in the life/becoming up ahead.’

‘I knew and worked with Lee for some years. He was thoughtful, gentle, kind, funny and compassionate. He liked to talk about healing with me, and the energetic world, and would share his experiences of being a ‘highly sensitive person’. He enjoyed telling me about his love for dance, as he explored other aspects of himself through the dance community. He was also a poet, and had a special, close relationship with the earth and nature. Lee was a good friend to many and very well loved. His kind, gentle presence will be missed. Go well Lee, much love to you.’

It’s a blue grief
because he was young
because he worshipped Green Tara
because he called himself Arwen
and planted trees.

I remember
his rose smile
his gentle presence
his reaching out
for friendship, for community, for love.

Tree-friend and poet,
the Earth will receive
his body
like a kiss,
and a sapling
will grow
from his bones.

Poems will be
spun for him,
some spoken,
some not.

If he knew this,
he would be moved
in the same way
he touched all of us.

‘I joined Windhorse Publications in 2019, about a year before Lee left. We shared a computer, so we were rarely in the office at the same time. As a result, we didn’t get to know each other very well. Nevertheless, Lee made quite an impression on me, as a highly sensitive and deeply caring person.’