From the Survey to Mount Kanchenjunga: Four New Volumes in the Complete Works of Sangharakshita Are Coming 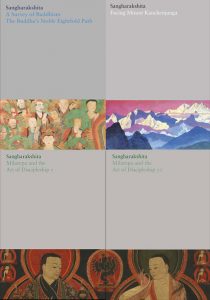 The Complete Works of Sangharakshita is going strong with four volumes published. These are: Dr. Ambedkar and the Revival of Buddhism I, The Three Jewels II, Mahayana Myths and Stories and The Rainbow Road from Tooting Broadway to Kalimpong.

Nearly 200 people (including Centres) have subscribed for the complete set, with the Hardback + eBook option the most popular one. The volumes are also sold individually, and we have especially noted purchases of Mahayana Myths and Stories and also The Three Jewels II. Both these volumes contain texts explored in Triratna’s Mitra study course.

A number of people are helping support the Complete Works. Special thanks to: Kalyanaprabha and Vidyadevi, the two editors of the volumes, who have also been raising awareness in Triratna about the Complete Works, Ruth for her design and typesetting work, Dhammarati for the cover designs, Satyalila for her indexing, and Michelle for coordinating so much of the production.

Which volumes are coming?

We are pleased to announce four new upcoming volumes for March 2018. They are as follows:

A Survey of Buddhism/The Buddha’s Noble Eightfold Path (Volume 1) – This volume includes two foundational texts that have inspired readers for decades.  In A Survey of Buddhism, out of print for a couple years, Sangharakshita’s beautiful prose, shot through with poetry, combines with an exceptional clarity of thought to make this one of the most inspiring elucidations of the Dharma. The Buddha’s Noble Eightfold Path: Vision and Transformation makes clear one of the best known formulations of the Buddha’s teaching.

Milarepa and the Art of Discipleship I and II (Volumes 18 and 19) – The story of the spiritual journey of the famous Tibetan yogi Milarepa is often told, but less well known are the stories of his encounters with those he met and taught after his own Enlightenment, eleven of which are the catalyst for volumes 18 and 19 of the Complete Works. The main emphasis is simply on how to overcome the difficulties that are sure to befall the would-be spiritual practitioner, how to learn what we need to learn – in short, how to practise the art of discipleship.

If you haven’t heard Vidyadevi’s beautiful and evocative talk on Sangharakshita’s teachings and writings, we think it’s worth a listen.

Note: subscription rates for the Complete Works will increase in the second half of 2018. Subscribe now for yourself or take out a gift membership for a Centre, library or individual to receive the lower subscription rate.

With all best wishes,

from the Windhorse Publications team: Priyananda, Michelle and Giulietta