Out now: ‘I Hear Her Words: An Introduction to Women in Buddhism’ 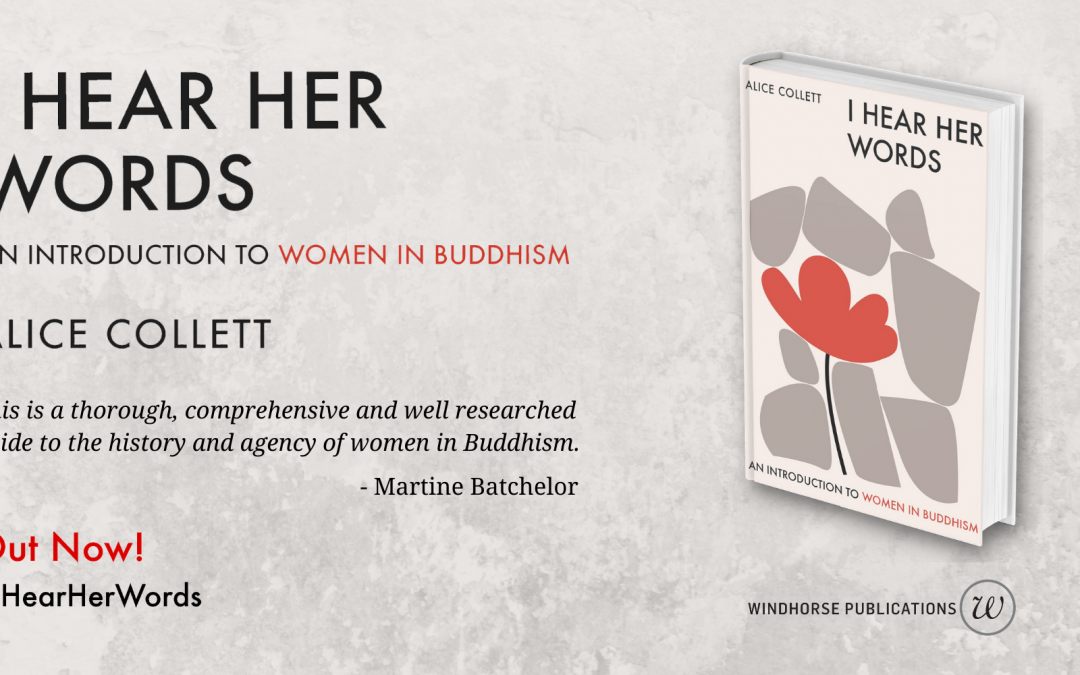 As a female student and practitioner of Buddhism, at times I feel frustrated by the underrepresentation of women in Buddhist texts and iconography. To give just one example, out of the forty-six figures on Triratna’s refuge tree, only two are female. Frustrated I may be, but I probably shouldn’t be surprised. As author Alice Collett points out in Windhorse Publications’ latest release, I Hear Her Words: An Introduction to Women in Buddhism, Buddhism was born and developed within ancient and medieval societies that held traditional views of women. Social norms classing women as inferior to men found their way into Buddhist tradition and some Buddhist texts. Consequently, throughout history, some members of Buddhist communities have tried to subjugate women.

Despite this, many women have overcome attempted constraint to become committed practitioners and esteemed teachers. Many of these stories have remained hidden from view for centuries and have only been brought to light by recent scholarship.

I Hear Her Words tells the stories of many inspiring Buddhist women over the centuries and across the world. It also shows that there is nothing intrinsically in opposition to gender equality in Buddhist ethics or Dharma. It’s an ideal introduction to gender studies in Buddhism and the history of women in the tradition.

Praise for I Hear Her Words

‘A sweeping survey of Buddhist women in Asia from historical times to the present, showing their personal and societal struggles, their many contributions, and their unique wisdom.’ – Judith Simmer-Brown, Distinguished Professor of Naropa University and author of Dakini’s Warm Breath: The Feminine Principle in Tibetan Buddhism

Extract
(From the Introduction)

As nuns and laywomen, women have been part of the Buddhist tradition since it began, in India, some 2,500 years ago. The place of women within the tradition is a subject that has occupied the minds of both practitioners and scholars of Buddhism for centuries. In this book, I provide an overview on the subject of women in Buddhism. Such questions as: Is there equality between the genders in Buddhist traditions? Do Buddhist texts say negative things about women? Do Buddhist ethics support prejudice against women? Are there any Buddhist doctrines that state, suggest, or imply that women are inferior to men? are addressed in the chapters of the book. Over the past twenty years, numerous books, book chapters, and articles have been written on the topic of women and Buddhism, and this current book is a survey of that research.

The book is aimed at anyone interested in the topic of women in Buddhism. It is intended for those seeking a compact account of the rich, often complex, and long neglected story of women’s contribution to Buddhist tradition. Women have inputted to both the heritage of teachings and practices and the transformation of the Buddhist tradition up to the present day.

Alice Collett is an academic who specializes in women in Indian Buddhism. Her books include the edited volume Women in Early Indian Buddhism: Comparative Textual Studies (2013) and the monograph, Lives of Early Buddhist Nuns: Biographies as History (2016).

Buy I Hear Her Words